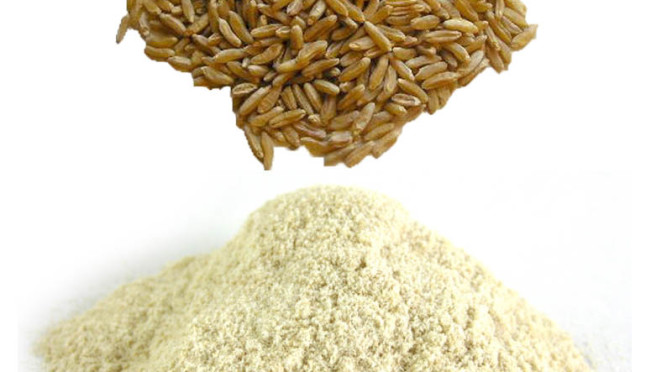 The kamut flour derived from wheat Eastern, also known as red wheat or khorasan. This type of cereal belonging to the grass family Triticum durum.
Originally from the "fertile crescent" area” It located between Egypt and Mesopotamia, It is characterized by a stem which can reach the 180 inches tall, her his cariosside, ie the grain looks bare and is longer than any other type of wheat. The kamut is very suitable for organic farming as it grows very well without the use of pesticides or fertilizers, then now is the most cultivated species in the world biologicalmente.

Utilization:
The kamut flour is used as a very viable alternative to wheat flour, pasta and flour for food and its grains are used as ingredients for soups, soups and salads.
Like all cereals, kamut does not have a high amount of gluten, so it is easily digested even by people who suffer from mild eating disorder, however it can not be taken by people with celiac disease.

The pizza with flour Kamut

The pizza made with the flour of this cereal, It is one of the most popular dishes and appreciated, the paste that is obtained, It turns out to be tasty and soft as traditional pizza, but it is much more digestible.
For the dough with flour kamut followed our previous post “dough for homemade pizza“.
After the mixing phase, dividetelo in 4 balls and let stand one hour for rising.
After an hour, spianate the balls to form 4 discs of dough by the diameter of 30 centimeters.

Dress them to your taste and bake in your oven preheated to 200/250 degrees for 15 minutes, until the edge will prove to be perfectly golden.
If you've tried to make this recipe add a comment, if you prefer a board before you realize you request an opinion here.
If you want to know more about kamut, you can consult wikipedia.

The Strength Of Flour Discover The Differences
Online Course
Free course of Pizzaiolo Online. Read Articles, run the test online and download your certificate of participation.