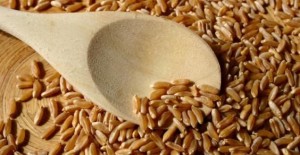 Kamut is not a type of wheat but a registered trademark, I'll explain the concept: Kamut is not the name of a grain, but the trademark (Coca Cola eat McDonalds) that the company Kamut International ltd (K.Int.) placed on a wheat varieties registered in the United States under the symbol QK-77, cultivated and sold as a monopoly and famous around the world thanks to a marketing unprecedented.

Who calls this variety the grain of the pharaoh because it is said that the seeds have been found around the middle of the last century in an Egyptian tomb and sent in Montana, where after thousands of years have been awakened and multiplied. The wheat produced and sold under the brand name Kamut grown in the United States (Montana) and in Canada (Alberta e Saskatchewan), under the strict control of the Quinn family, owner of the company K.Int.; in Italy imported only by authorized companies and then milled only from mills authorized. All products bearing the mark are prepared and sold under license from K.Int and under the control of the Kamut Enterprises of Europe. The very effective marketing that underpin the success of Kamut has relied on three aspects: the fascinating legend of its discovery, the attribution of exceptional nutritional qualities and an alleged compatibility for those who are intolerant to gluten. Wheat or Wheat big eastern Khorasan or call him by his name handed down, common and public, while Kamut is a fancy name recorded species (Wheat swollen subsp. turanicum) belonging to the same genetic group of durum wheat: presents a culm (stem) high even 180 cm; did the caryopsis (berry) naked and very long, more than that of any other wheat; originating in the zone between Anatolia and the Iranian Plateau (Khorasan the name of a region of Iran); Over the centuries it spread on the shores of the eastern Mediterranean, where small-scale companies survived the expansion of hard and soft wheat. The invention of the commercial discovery So, to find the Khorasan in Egypt was not (and is not) really need to disturb the tombs of the Pharaohs; not to mention that a type of Khorasan was (and, is still marginally) also cultivated between Lucania, Sannio and Abruzzo: la Saragolla, not to be confused with a homonym improved varieties of durum wheat obtained from a cross and recorded nal 2004 by the Company Manufacturers Seeds of Bologna. 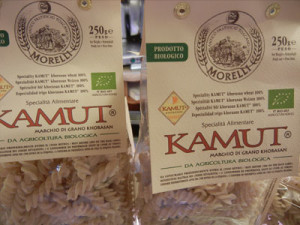 Also do not forget that the germination of wheat decade after a few decades, as are the ideal storage conditions. All this leads to the recognition in the history of the alleged discovery of Khorasan / Kamut only a fanciful invention commercial, elaborated to stimulate the desire for something pure, ancient and exotic. E, onor to vero, la Stessa K.Int. has distanced himself from the legend that, prealtro, now no longer needs to be encouraged. From the data available today, source of public and private, between the elements of greater characterization of Khorasan there are a high protein content, in general higher than the average of the hard and soft wheats, and good levels of beta-carotene and selenium; for the other components and nutritional quality, there are no substantial differences compared to other wheats. Gluten: non è can not afford not povero Bisogna, indeed, clarify that, as each wheat, Khorasan is unsuitable for feeding celiac, because it contains gluten (e non è can not afford not povero, come, little responsibly, some advertising claims or suggests) and it contains an extent greater than that of common wheats and numerous varieties of durum wheat.

Pizza with Bacon and Wurstel

Focaccia with tomatoes and buffalo mozzarella