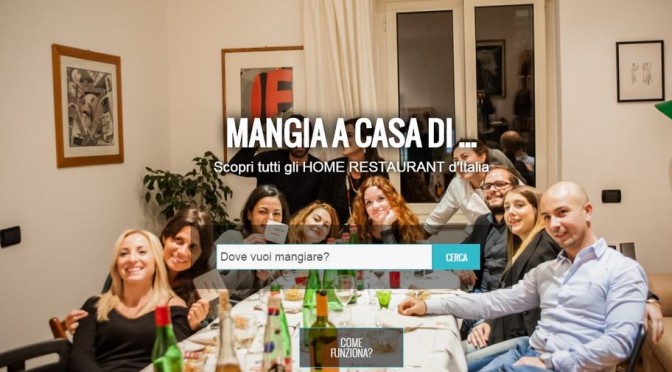 Open a restaurant or why not? a pizzeria in their own home is a trend that is taking more and more foot in Italy, in large cities such as Rome, Milan turin or if there are more than 300 and strong growth, even on the period of crisis we are going through.
It is now 4 the 5 years from the first time I heard of this type of activity. Common people who decided to prepare dinners at home for any guests booked, that at the end of dinner regularly paid a fee for the service received. I always wondered: How strange, restaurateurs and owners of pizzerias to open a club must comply with strict rules and pay taxes cream, how is it that an individual might do so freely?

Finally after a few years, It received a law of the Ministry of Economic Development that puts an end to all this confusion and lack of regulation:
“Il Ristorante a Casa è da considerarsi ATTIVITA’ ECONOMIC fledged!!!
The resolution says the Mise: Open a restaurant in his home is in an economic activity All checked effects. Must be subject to professional requirements, sanitary and a set of rules in matters of security, urban planning and construction. starting with Scia to be presented to the municipality of residence.
The recent resolution of the Ministry of Economic Development also clarifies how can configure activity cook at home from word of mouth that has come to emerge in a real business, that alarmed even the category of Professional caterers that looking at the phenomenon with concern, They asked that the rules.

Pizza with Bacon and Wurstel

Focaccia with tomatoes and buffalo mozzarella